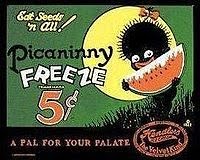 The influence of the British is undeniable. They speak English, drive on the left side of the road, eat fish and chips, play cricket and have high tea at 4pm with scones and jam, put the queen on their cash (I haven’t seen any Maori on the cash yet) and the old folk still wear knee high socks with their sandals.
I grew up in England, and one of the stories I remember reading was ‘Little Black Sambo”. It was written by a Victorian white woman living in India.

The story itself is not racist, but the character of Black Sambo is. As a black child being called a Sambo was a racial slurr. I was teased with this name by my hateful little catholic school peers.
Another antiquated racial icon that was around when I was a child, was ‘The Golliwog’.
Another relic of an earlier time when racism against those of African descent was blatant. As a child, being called a Wog, was no fun.

Here in New Zealand there is a revival of this toy. It is placed in the Museum, with a banner reading something along the lines of ‘a cherished childhood cultural artifact”.
I was horrified to see a child carrying one recently. When I made a point of it, the reaction was, “What’s the big deal, it’s just a toy”.
I said, “If you were black, you might be more sensitive to the issue”. In my research into little Black Sambo and the Gollywog, and because of my childhood experiences in England, I have a clear understanding that these images are derogatory and racist.
I guess they are a little behind the times here in NZ.