Our original plan was to teach a two hour session, but we shifted that idea when we realised two hours would not be enough. We came back the next week to offer a second two hour session, and that was still not enough time to sit share food and talk about the experiences.

There was so much squashed into our planned two hour session we didn’t think about how much time it would take a group not used to the art making process to ‘digest’ the activity and really enjoy the making, sharing and talking.

The fact that we were so focused on fulfilling our own agenda, we didn’t plan for the time to let the participants explore deeply.

Here are some of the photos taken at the workshop session two, our Fabulous Feast, a group mural painting about memories of food. 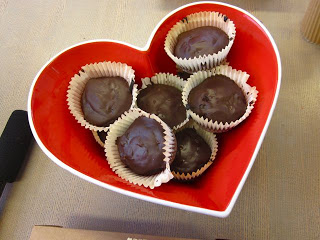 I observed not many of the women went anywhere near the paints in the session. I take it for granted that visual art, especially painting, is as frightening for people as music workshop skills was for me, to be with a group of trained musicians and not know how to play a musical instrument is intimidating.

Art becomes this soul bearing activity, for some people it’s revealing qualities can make them feel very vulnerable. One of the group members stood by looking really interested in the activities, I asked if she wanted to paint. She said quickly, ‘no way, I can’t paint’. She was glad we had brought collage materials and did take part in collaging onto our table cloth group mural.

She said that she had unpleasant memories from school in art classes, in which she felt her work was never good enough compared to everyone else. She could never make it perfect. She chose to cook food instead. She was a professional chef. 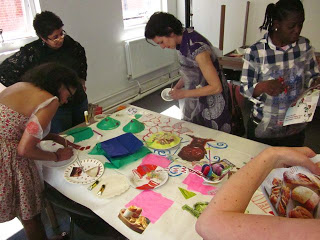 We asked the group to invite women (by either drawing them or something that represented them). One person decided she wanted to invite the queen along to tea. Some people got really focused in immediately on one piece of artwork, others added to what was on the table, another member decided that she would rather  eat the queen and added that to the collage. 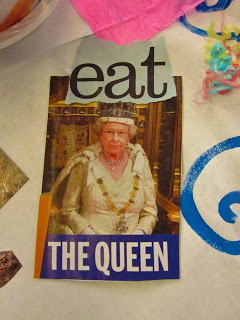 We played music as we worked on art making, and that helped people to relax and get into a focused mood. As we sat together to share food we had brought all sorts of conversations arose.
The fact that we decided to share food was such a great idea. Luckily there were some great cooks among us. One woman had cooked food for hundreds of people at Greenham Common for three months in the 70’s.

After all this talk of food, and anxiety about whether we should talk about the issues people may have had about food, actually working with the women and talking about what came up for them was actually not difficult or challenging for them at all. 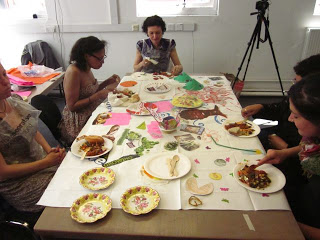 One woman said her immediate reaction to the idea of the project were memories of drunken Christmas parties, where food would be on the walls rather than on the plates, and that she didn’t like cooking.
This exercise had helped her to think more deeply about her relationship to food, both positive and negative. She felt the exercise helped her to turn the memories into something she could laugh about with the group, she had transformed them through a creative process. 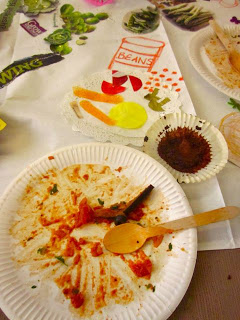 The food was delicious, and it went well with the mural. I loved listening to the candid responses of the women, who were unhindered by saying the politically correct thing. One woman was surprised to hear other people didn’t like food or cooking because she had grown up with only positive experience around food. She loved to cook for people and couldn’t imagine why anyone would have issues with it. She said she learned a lot in this process, from listening to other women sharing their experiences with food. 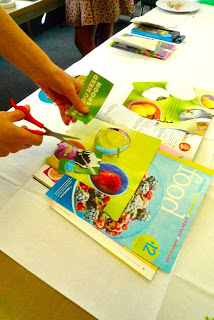 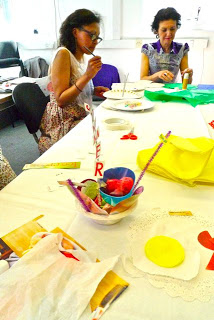 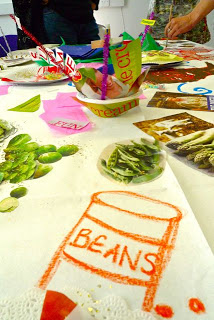